A long time ago I received an offer from a real estate agency and bought a large estate from them afterwards. I still remember that moment – they sent me detailed photographs of the building. At first glance, I knew: this was a real must. In no time the postman arrived with a parcel for me. It was a bunch of keys. The agents act in an unusual way, I reckon. Anyway, I set out to look at it. It was a rather exceptional act from the agents, anyway. Although I had two maps on me, I lost my way (I confess) and arrived a couple of hours later. It was getting dark. The large, ragged and atypical stone house had obviously been deserted for a while: far enough from any rush of civilisation, it might have been tough to find a buyer. The building I saw was marvellous – and the price was very friendly indeed. Perhaps the house had discouraged people by being so bleak and unpractical – such a large house to heat, dozens of windows to wash... 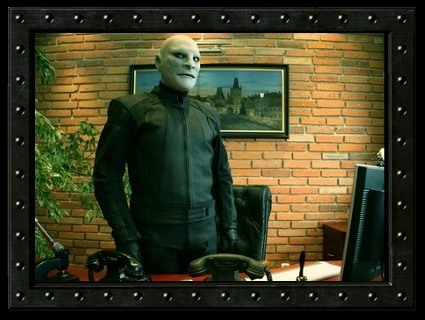 Perhaps I was too quick to decide, I hesitated. What's more - behind the wall of the wild garden with overgrown fruit trees, there was a cemetery. However, I don’t believe in ghosts, and the house perfectly fitted my idea of the peace and tranquillity I was searching for. The interiors were preserved and well-arranged (forget the dust covering every item of furniture, of course). I set out to see what the house was like. I admit that not only dust, but a kind of obtrusive anxiety fell on me in some rooms. In the basement there was a big surprise: at the end of a long corridor, there was a hevy armoured door. When I succeeded in sliding it open (my squeezed thumb was a side effect, by the way), I discovered a large stone-walled shop. It was like a prehistoric bomb shelter. For a while, I narrowed my eyes, then decided to switch on a halogen torch: there were no windows. The next second, I took fright: in the light beam, lying on the marble desk, there was a cascade of human heads! They were all staring at me, of course. At second sight, they were not human heads but dusty replicas. They were masks. I had never seen anything like it before: they were so real. Some of them even had hair, and there was a mask of an old man with thick spectacles. Dimly lit, it was a scary funhouse. When I recovered my wits, I etnered further: it was a little studio, with several doors leading to smaller rooms, full of cobwebs – hiding many mysterious objects: I had no idea what all those items were for! It was like a madman or a mad doctor´s office, especially when I came across fake hands, sets of false teeth and other fake parts of the human body. These scary objects were neatly piled in the black drawers of a long desk with mirrors. On the floor, there was a massive ancient bookcase - having collapsed a long time ago, obviously. Loads of reference books were spread around, scattered here and there with broken glass. Tonnes of paper were just everywhere. I made my way through all the literature and unbelievably rich mouse excrement to the wall. There was a built-in riveted strongbox. The door was open – and there was a rectangular copper case. It was hiding a carefully folded mask - a gruesome, bald, ash-grey mask. It was such an unpleasant feeling: the mask was like a human complexion. As if it were sleeping.

The mask resembled an ancient sculpture – but inside out. It was like a mockery of classic beauty, a perfectly ugly appearance. At the end of my explorations down there, I took the case with the remarkable mask into one of the bathrooms (it was cleaner than the others). I gently wiped the grey mask and – hesitantly – put it on my head. It was close-fitting, indeed. Then I felt something strange pressing against the crown of my head, though – but as soon as I shoot the mouse droppings out, it was okay. When I looked at myself in the mirror, I was shocked. It wasn’t my face: my lovely real face had disappeared. Instead, an ugly guy was grimacing at me from the mirror – a predator, a ghost. I nearly said good morning to myself. Now I understood who had lived in the house: yes, it was him. It was Fantomas, the international criminal and master of disguise, a model inspiration for writers and filmmakers. No doubt about it. The bald skull let him put on new faces and take them off in a second. He did exist. The shelter in the basement was his secret laboratory.

In the course of the renovation, the whole house was searched. Two secret escapes were found – one ended behind the wall at the cemetery, under a granite tombstone, while the other was a dead end, now buried. There was no trace at all of the previous owner– and hadn’t been ever since. I contacted the real estate agency but – it no longer existed. The agency had disappeared. As if the earth had swallowed it – a mystery forever. On top of that, the sum of money I’d paid for the house arrived back in my account. In a short time, I used the money as investment capital to start a new business. Fantomas was gone. His working equipment and tools were left here, though. What should I do with this gift? Was I able to use all of it? This was the beginning of the idea to share the masks with other people. In 1990 I founded a manufactory producing rubber faces, following the original formulas, restoring the extraordinary craft in a modern way.

At present, a team comprising the expert elite works in my GF® Laboratories. They don´t even argue about things – at least not very often. The manufacturing facility and the anonymous greyish mask from the strongbox – the one talking to you from the website – were named for my predecessor who inspired the original know-how of designer faces. We’ve developed technological procedures whose parameters conform to the current legal requirements and modern needs. As the mask is a sister of the puppet, the finances received from our customers are transferred to the development and operation of an international puppet theatre. For more detailed information, see the chapter about the theatre. 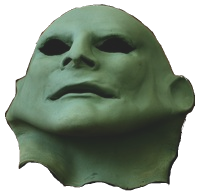 Why don´t you choose a new face right now? We offer hundreds of brand designs; all are of top professional quality. It’s important to us to be able to supply any item for a reasonable price to any destination in the world.

I’m a man of hundred faces. Never, ever will you see my real one - my own face. I’m not to discard my mask. Never. I’ve created many faces for you. My Greyland Film assistants may help you to choose the right one – just for you.

Latex Face made of foam rubber – that means magic, soft, elastic latex mask. The masks’ faces adapt to any human head. The mask has a realistic face design and is extremely light. Made in professional film credibility for purpose of private masking. Greyland mask is designed by artist of foam latex masks Milos Grey exclusively for fun, private parties, free time activities, amateur theatre, carnivals or Halloween, and other noncommercial purposes.

The realistic masks of Greyland Film are hand-made. Design of the horror and comic masks is in high quality with available price. The original piece from Greyland is full of surprising details. If you want excellent quality for your money and the service of a real original, visit websites of Greyland Film company! Complete your collection with new Greyland Film brand masks!